Blog - Latest News
You are here: Home / Newsroom / News and events / Events / The third training was held within the project BWL

On August 16 this year, the regional center for waste management hosted the third training within the project “Establishing the system of sustainable bulky waste management, on the territories of the cities of Uzice and Tuzla – Bulky Waste Less/BWL”.

The project team presented to the employees of “Duboko” and “Bioktoš” the previous results related to the removal of bulky waste in Užice.

The new bulky waste management system was successfully established in Užice and Tuzla. But based on the monitoring, information from the field, and discussion, it was concluded that it is necessary to continue the work on educating citizens with the aim of increasing their responsibility in cooperation with the media and inspection services.

As part of the training, certificates were distributed to the participants of the education workshops from “Duboko” and “Bioktoš”, which are directly or indirectly related to the collection, transport and processing of bulky waste. 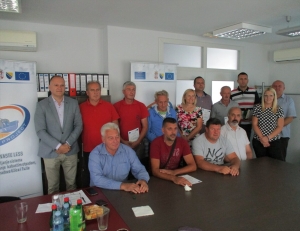 The final conference was held under the project “Improving fire protection...
Scroll to top