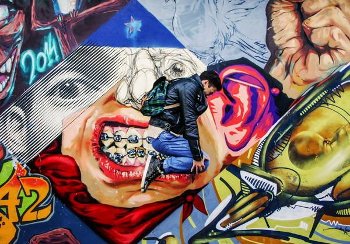 Although more than 220 photos arrived, technical criteria specified in the contest were met by 135 photos and the best 30 were selected among them by the followers of the European Integration Office’s Facebook page, who voted for their favourites. Among the 30 photos selected, the best photo was chosen by the contest jury headed by Dragan Kujundžić, a photographer, and by the representatives of the European Integration Office and the EU Delegation to the Republic of Serbia as members of the jury. In the opinion of the expert jury, the winning photo responded in the best way by its colouring and dynamics to the contest theme – street art without borders.

The winning photo, along with nine of those which, according to the jury evaluation, responded best to the theme, will be on display in the Cultural Centre in Negotin accompanying the event of the Belgrade Philharmonic Orchestra’s concert during Mokranjac Days, financially supported by the EU Delegation to the Republic of Serbia.