Media presentation of the project was realized on 19th and 20th February, 2014, simultaneously with the start of education of parents in certain educational institutions in Ruma, Sremska Mitrovica, Indjija and Stara Pazova. On that occasion, the Dean of the Faculty and the Project Manager, Prof. PhD Dejan Madic, was the guest in the radio program “Prelom”, on 19th February, 2014, and on 20th February, 2014, he participated in the television program “Razglednice”, at the Radio-Television of Vojvodina, national broadcast. Project associates presented the project at the local television “Sremska Televizija”. Also, a comprehensive article, an interview with Prof. PhD Madic, was published in the special weekly issue of the newspaper “Dnevnik”, on 23rd February, 2014, and it concerned the significance of a joint project “Improving testing abilities on postural and spinal column status – Spinelab“. As the topic of the project is very significant and since it has arisen interest of the media and the public, the Faculty of Sport and Physical Education will continue with media activities and presentation of the project during the following period as well. 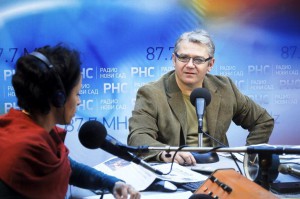