The exhibition “Vlade Divac – from Prijepolje to Springfield” was officially opened at November 12, 2020 in the Olympic Museum in Sarajevo. This exhibition is one of the activities of the project “Museum Stories”, the opening was attended by the legendary basketball player Vlade Divac, Mayor of Sarajevo Abdulah Skaka, President of the Olympic Committee of BiH Marijan Kvesic, Director of the Olympic Museum Edin Numankadic, Director of the Museum in Prijepolje Milan Cmiljanovic, Chairman of the Sarajevo City Council Igor Gavrić.

The exhibition was opened by the Mayor of Sarajevo, Abdulah Skaka, who emphasized that the City Administration was one of the first organizations in the whole of BiH who formed a serious team dealing with EU fonds and projects. The museum story is a confirmation that significant funds can be obtained in cooperation with European partners,also fonds will enrich the tourist offer and help culture in the City of Sarajevo.

“Basketball is a sport that requires a common initiative, I believe we must be focused on that and build relationships in the future on that basis,” said Skaka, who thanked the famous basketball player and presented him with the Sarajevo Monograph.

The legendary basketball player said that he is emotional when he visits friends in Sarajevo.

“I feel good in this city, especially in this beautiful ambience of the Olympic Museum, which my friends from the BiH Olympic Committee managed to renew and show everyone the values ​​that athletes of this city and region have achived in the past. After my career, I donated all my medals, cups to my hometown Prijepolje. Today, the Museum of Prijepolje  is a guest at the Olympic Museum with aim  to present and show a beautiful time of  athletes from this region, “he added. “I am glad that my hometown has the opportunity to present itself in Sarajevo and to present an exhibition of my career through all the medals I won and donated to my city, “said Divac. 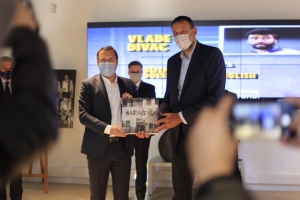 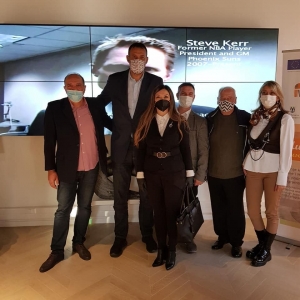 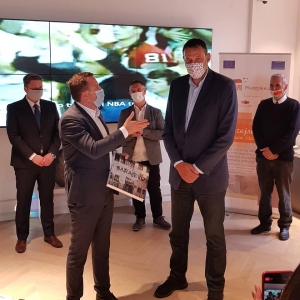