The ‘’Fair/ Exhibition – Promotion of Roma Culture and Tradition’’ will be held on Wednesday, March 26, 2014, starting at 11:30, at the Art House of Sevdah in Sarajevo.

‘’Cultural evenings dedicated to the promotion of life and work of Sofka Nikolic’’ will be held on Thursday, March 27, 2014, the program starts at 12:00, and the closed part of program for invitees at 18:00 at the Art House of Sevdah in Sarajevo.

The events will be opened by the speeches of Ivo Komšic, the Mayor of the City of Sarajevo, Ševkija Okeric, Director of Sarajevo Regional Development Agency SERDA, Suzana Jašarevic, Director of Hilfswerk Austria International in Bosnia and Herzegovina, Aleksandar Vasiljkovic, National Council Roma National Minority in Serbia, a representative of the Joint Technical Secretariat. The representatives of the embassies of the Republic of Austria, Federal Republic of Germany, Czech Republic and Republic of Serbia, countries in which Sofka Nikolic made records and where she left an indelible trace, will also be invited.

A press conference is scheduled for Thursday, March 27, at 13:00. The goal of these events is to promote the culture and tradition of Roma people in Bosnia and Herzegovina and Serbia, inform the public about the artistic and literary achievements of Roma people, traditional clothes, traditional crafts and to promote the life and work of Sofka Nikolic – a singer whose life was linked to Serbia and Bosnia and Herzegovina, who performed between two world wars in the biggest European cities and was the most sought after singer of Europe.

The EU is financing this project with an amount of 295,134.17 EUR. The project is implemented by the City of Sarajevo in partnership with the National Council Roma National Minority in Serbia, Sarajevo Regional Development Agency SERDA and Hilfswerk Austria International in Bosnia and Herzegovina. 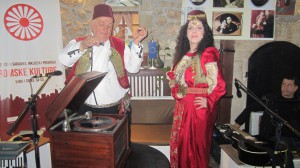