Blog - Latest News
You are here: Home / Newsroom / News and events / Letter to the citizens of Užice

Letter to the citizens of Užice

“Little town where the problems are greater than in our Tuzla. In this city where the people are great, not by physical appearance, but the humanity and beauty. It is one of the largest cities in Serbia, and even in our beautiful Yugoslavia, by the friendship and respect of other nations and cultures.

Maybe because of that it was Titovo Užice. Perhaps Tito left the mark, a former regime where we all were like brothers. Although I had never been there, and perhaps I never will, Užice is a second Tuzla for all of us.

After the camp in Srebrenik, traces and great memories about good friends or love will remain. Not only had this camp awakened in us awareness of the environment and its protection, but also knocked down the barriers and obstacles to faith and ethnicity. It’s all in our passports and addresses. Now we are all one.

This small city in out hearts and we love it even more than the citizens of Užice who live in it. And while we entertain and educate here, how to help Užice and Tuzla? Užice city and all those brave men endure greater suffering than the cities bigger than Tuzla.

Therefore, dear friends, make sure that this camp must be even more incentive for them to provide Užice with clean water and air. Fellow citizens of Užice, you must know that you are not alone in this fight, there are yours citizens of Tuzla.

“Together give a voice for the salvation of Užice!”

The letter was the act of a young Mr. Armin Bjelić, a student of the School of Mechanics in Tuzla, who, along with 27 other students of secondary schools from Užice and Tuzla, participated in the eco-camp “Tuzla in 2014” which was realized within the project “Establishment of the primary waste selection in Užice and Tuzla”. The project is being implemented under the Cross-border Programme Serbia-Bosnia and Herzegovina (second call), from February 2013 to April 2014. The project team proudly announce this message, convinced that it is the best indicator of the adequacy of the topic and the effectiveness of its implementation. The project is jointly implemented by PUC Regional sanitary landfill of solid communal waste “Duboko” from Užice, PUC “Komunalac” from Tuzla, Teachers Association “Survival” from Užice, ”The Center for Ecology and Energy” from Tuzla and “Zlatibor” Regional Development Agency from Užice. 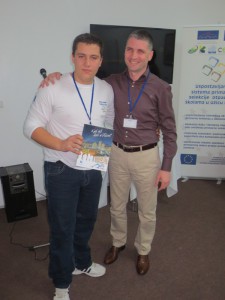