On Thursday 30th May 2013th , at 14:00 pm, in front of the Cultural Centre in Bijeljina, the two Mayors Mico Micic, of Bijeljina and Slobodan Savic, of Bogatic, along with the EU Delegation to BiH representative –  Mr. Paul Smid have put into operation the “Strawberry Tree” – public solar charger for mobile phones and other mobile devices. Immediately after the first one, installed on the square in front of the Bijeljina Cultural Centre,  the second “Strawberry Tree – Black” was activated, within the City park.
Setting up solar chargers in Bijeljina is part of the Cross – Border cooperation program, between Serbia and Bosnia and Herzegovina : project –  ” Bijeljina and Bogatic, together on the way towards energy sustainability through increasing energy efficiency and promotion of renewable energy sources’, funded by the European Union.
Initiating of the solar chargers was also a part of the contract awarding ceremony for all the second Call Cross-border Programme Serbia – Bosnia and Herzegovina, users, held on the same day within the Ethnic Village “Stanisici.”

Many media published this news. Media clipping can be found here. 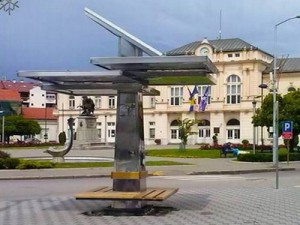 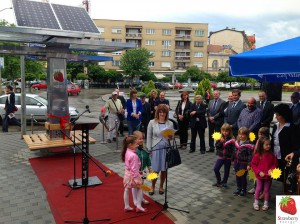