Blog - Latest News
You are here: Home / Newsroom / News and events / Events / The Opening conference of the project ”Neolife” was held in...

The Opening conference of the project ‘’New life of Neolithic heritage in recognized natural areas of great importance – NeoLIFE’’ was held on March 6th, 2019 in the City Hall in Uzice. The project is co-financed by European Union under the Cross-Border Cooperation Programme Serbia–Bosnia and Hercegovina 2014-2020.

The conference was organized with the aim to make familiar to participants the cultural and social aspects of the project activities for the preservation and presentation of common heritage of both countries through the exchange of expert knowledge and the strengthening of intercultural communication. On the other hand through presentation is ensured the acceptance of the new forms of interpretation of the life of Neolitic man in our area by the establishment of the sustainable model of management on contemporary archeological parks in the European Union and region.

Mihajila Dašić, Assistant Minister for Cross-Border and Transnational Co-operation at the Ministry of European Integration of the Republic of Serbia, opened the conference. On this occasion, Dašić focused on the importance of projects of this type for the development of communities and institutions at the local level, characterized the NeoLIFE project as an example of a good practice and that as such it is recognized by the European Union as well.

Tuzla City Council Chairman Aleksandar Vujadinovic highlighted the need to establish concrete forms of cooperation between the two neighboring countries and the two cities in order to take advantage properly of the territories that share common cultural and historical values. Pointing out that the complex of Pannonian Lakes in Tuzla has been visited by more than four million visitors to date, Uzice believes that there is a good predisposition for the development of a similar model of functioning, with the help of European funds, and that the project is expected to be implemented on a satisfactory way.

At the end of the introductory statement, the Mayor of Uzice, Tihomir Petković, welcomed the guests, noting that this is an important project for improving the tourist offer of the city of Uzice. “A project worth nearly 600,000 euros will be built an open-air archaeological museum near the Staparska Gradina. From the future archaeological park we expect a lot in the future, that a large number of school excursions, researchers, tourists and the citizens of Uzice who are to visit this destination. With the archaeological park situated near the Old Town and the Old Hydroelectric Power Station, we will be significantly more attractive and more interesting for those tourists who, up to now, passed by and continued their path to Zlatibor, Zlatar, Tara’’, said the mayor of Uzice.

Dr. Emilia Nikolić, the author of the conceptual solution,presented the idea, the way and the participants of the project.

“The opening of such an open-air archaeological museum has its place in a larger archaeological park. When we say archaeological museum, we mean the place where there are replicas of historical buildings. Here it will be a replica of a neo-typical prehistoric house with some elements from the Bronze Age, found here on the Gradina. In the upcoming period, there will be four wattle knitting houses and one hut, so future exhibitions will be held there. There will also be a modern building with workshops, work tables, toilets, but it will also be built with traditional materials. ”

The project was made with the expert assistance of the organization of the European Archaeological Museum and the representative of this organization, Milica Tapavički Ilic, expressed the desire to become a regular member of the EXARC after the realization and opening of the archaeological park. 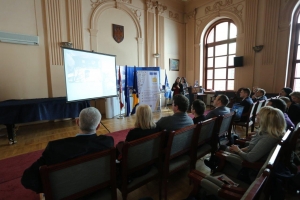 The project “Museum Stories” was presented
Scroll to top