Blog - Latest News
You are here: Home / Newsroom / News and events / Kick-off Conference on the occasion of the launch of the Second Call for...

Directorate for European Integration of Bosnia and Herzegovina as Operating Structure in charge of the implementation of the Programmes financed from the IPA Component II (cross-border cooperation), in cooperation with the European Integration Office of the Government of the Republic of Serbia and with the assistance of the Joint Technical Secretariat, organized a Kick-off Conference on the occasion of the launch of the Second Call for Proposals within the Cross-Border Programme Serbia – Bosnia and Herzegovina, in Bijeljina (Ethno Village Stanisici) on September 13, 2011. The Conference was visited by 130 guests who were addressed by the representatives of the Delegations of the European Union to Bosnia and Herzegovina and to the Republic of Serbia, by the Operating Structures and also by the Minister Adviser of the Embassy of the Republic of Serbia to Bosnia and Herzegovina. The guests had an opportunity to hear two success stories told by two beneficiary organizations whose projects are financed from the First Call for Proposals. 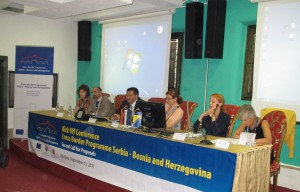