At the Contract Signing Ceremony, Mr. Božidar Đelić and His Excellency  Ambassador Vincent Degert stressed the importance of the cross-border cooperation programmes and explained that, by implementing these projects, foundations of new cross-border cooperation and development of the cross-border regions are being made. Furthermore, institutions from Serbia, Bosnia and Herzegovina and Montenegro are gaining valuable experience by learning how to use the European Union funds. Implementation of these projects sends a sound message of the importance of the European integration process even to the far and less developed parts of our Countries.

After the Contract Signing Ceremony, Mr. Božidar Đelić  and His Excellency  Ambassador Vincent Degert signed the Financial agreements between the European Union and the Republic of Serbia under the Instrument for Pre-accession Assistance regarding the financing of the Cross-border Programmes Serbia – Bosnia and Herzegovina and Serbia – Montenegro. These Financial agreements are signed once a year by the Government of the Republic of Serbia and the European Commission. The EU financial assistance for the Cross-border Programme Serbia – Bosnia and Herzegovina amounts to EUR 1.100.000, while for the Programme Serbia – Montenegro it amounts to  EUR 500.000.

As preparations are underway for the launch of the Second Call for Proposals, planned in the next few months, this Ceremony was followed by a Partner Search Forum, through which potential beneficiaries established contacts with potential cross-border partners and presented their organizations and ideas for cooperation at three thematic tables: Economy, Environment and Social sector/activities.

Contract Signing Ceremony and Partner search Forum were visited by a significant number of people. The pictures from the event can be seen here. 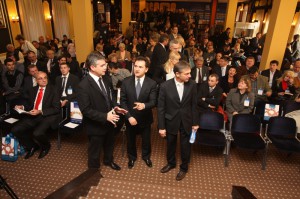