On Wednesday, October 21st, 2009, H.E. Mr Vincent Degert, Head of the Delegation of the European Commission to the Republic of Serbia, visited the Joint Technical Secretariat in Uzice. At the press conference held in the JTS, Mr Degert stressed the importance of EU Cross-border cooperation projects in general and explained that their main role was to stimulate knowledge and to improve understanding and tolerance between neighbors. Mr Degert also pointed out that he was very satisfied with the great number of project proposals submitted to the JTS office in Uzice during the First call for project proposals for the Cross-border Programme Serbia – Bosnia and Herzegovina, which had been launched on July 8th, 2009 and successfully closed on October 6th, 2009.
Head of the JTS Uzice, Ms Ljiljana Rsumovic, and Mr Degert expressed their hopes that, among the project proposals submitted within the First call, there would be a substantial number of successful projects. Ms Rsumovic said that the European Commission funds for this Call amounted to €1.980.000 for the Serbian part of the eligible territory, which consists of Sremski, Macvanski, Zlatiborski and Kolubarski counties, while the funds for the 67 municipalities in the eligible BiH territory amounted to €1.260.000.
For the grant could apply non-profit organizations, regional and local public authorities, chambers of commerce, schools, non-governmental organizations and others.
“In cooperation with the Ministry of Finance of the Republic of Serbia and with The Delegation of the European Commission to the Republic of Serbia, the JTS organized and held a number of workshops for potential candidates in Serbia as well in Bosnia and Herzegovina. The aim of these workshops was to make people familiar with the procedures of making projects and also of applying for the EU funds”, added Ms Rsumovic. Ms Rsumovic also explained that there were two Measures under which applicants could have applied: Measure 1.1 – Improving the productivity and competitiveness of the area’s rural, economic and environmental resources and Measure 1.2 – Initiatives targeting the exchange of ideas between people and the enhancement of the professional and civic society cooperation. 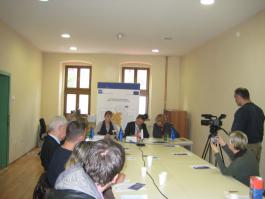